BACK TO ALL PROJECT GUIDES

Although carpenter bees prefer softwoods such as cedar, redwood, or cypress, they happily attack pine and most other species of wood. 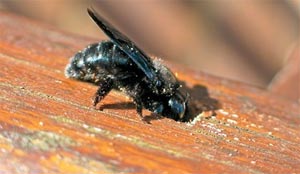 Every spring we get lots of calls about carpenter bees drilling into logs, fascia boards, eaves, decks and other unpainted wood surfaces. Carpenter bees are big, black solitary bees that look similar to bumblebees but have bare, shiny backs whereas a bumblebee's back is hairy. Unlike honey bees that reproduce in hives, carpenter bees drill into wood in order to lay their eggs. Their holes can be identified easily as they are perfectly round and about 1/4 inch in diameter.

Although carpenter bees prefer softwoods such as cedar, redwood, or cypress, they happily attack pine and most other species of wood. Even pressure treated wood is not immune from carpenter bee attack. As the bee drills into the wood, coarse sawdust may be seen coming out of the hole and piling up beneath the hole. Since it only takes a couple of hours for a carpenter bee to drill a hole a few inches deep, lots of holes can appear over a fairly short period of time.

Most carpenter bee activity occurs in early spring when male and female bees emerge after spending the winter in old nest tunnels. Once they have paired and mated, the female bee drills into a suitable site while the male stays nearby to ward off intruders. Male carpenter bees often frighten people with their aggressive behavior but since they have no stinger they are essentially harmless. Females have a stinger but only use it if molested.

Once the initial hole is drilled through the surface, the bee will make a turn and excavate a tunnel along the grain of the wood. This tunnel, which may run for several inches, becomes the cavity where the female deposits her eggs. Several eggs are laid in individual chambers separated by plugs of pollen on which the larvae feed until they emerge as adults during the summer months. In addition to making new holes, carpenter bees also enlarge old tunnels. If left unattended for several years, serious damage to a wood member may result.

In late fall, activity may again be seen as both male and female carpenter bees clean out old nest cavities where they stay over winter. Since carpenter bees tend to migrate back to the same area from which they emerged, it is important to implement some control measures in order to prevent logs and wood members from becoming riddled by these bees.

Any carpenter bee holes you can reach should be treated and plugged since existing holes attract more carpenter bees. The way to treat an existing hole and tunnel depends on the time of year, and if bees are present at the time of treatment. If the female is drilling away when you find a hole (you can see sawdust coming out or hear her working inside) spray a contact pesticide like wasp and hornet spray into the hole. She will quickly back out and die. Immediately fill the hole with wood putty or Energy Seal. You need to treat the hole even if it appears empty since the bee may be resting and, if left alive, will drill back through the plug you’ve just inserted.

If you find carpenter bee holes in late spring or early summer it's difficult to tell if there are bee larvae developing in the tunnels. The best thing to do is to run a length of flexible wire into the tunnels in order to break through the pollen plugs separating the chambers. Then spray a pesticide into the hole and seal it up. The same thing should be done on holes found in the fall or winter to kill any bees that may be over-wintering in the holes. Just remember to plug the holes since they will attract more carpenter bees come spring.

Several people told us that although they sprayed a pesticide into the holes, carpenter bees later emerged, in some cases even after the holes were plugged. How can this happen?

If we take a look at a cross section diagram of a carpenter bee gallery we can see how. After drilling out a four to five inch long gallery, the female carpenter bee lays an egg in back of the gallery then places a plug of pollen she has gathered to form a chamber (A). She continues doing this until there are four to six egg chambers in place. After a few days the egg hatches and a small white grub emerges (B). The grub feeds on the pollen plug for a few weeks (C) until it is ready to pupate (D) and change into an adult bee (E).

If you look at the way the gallery is constructed you can see why spraying a pesticide in the hole may not kill all of the developing bee larvae. The pollen plugs prevent the pesticide from getting to the rear chambers. So before you spray any pesticide into a carpenter bee hole be sure to run a stiff wire all the way to the back of the gallery to break through any pollen plugs. That way all of the larval chambers will be exposed to the pesticide.

A few years ago we requested information about the effect of our gloss topcoat on reducing carpenter bee activity via survey. Out of over 20 responses by letter, phone and e-mail only two reported any penetration of the gloss topcoat by carpenter bees. One home went from 20 to 30 holes the previous year down to 2 this past year and the other went from over 20 holes to 4 holes. This confirms our suspicion that the Lifeline Advance Gloss exterior topcoat appears to provide a finish to the wood that carpenter bees do not find very attractive. That is not saying that the gloss finish repels carpenter bees. It does not. Although bees would occasionally land on the gloss topcoat, they just did not drill through it. So why is it? Well, let's be clear that the Lifeline Advance Gloss topcoat is not a pesticide nor does it have any pesticide properties. It appears to form a coating on the surface of the wood that carpenter bees are reluctant to drill through. Why? It could be the glossy look or that the hard, slick finish does not appeal to them.

Although carpenter bees prefer bare wood they will attack wood that is stained. Painted wood surfaces, on the other hand, are rarely attacked since the bees must see or feel the grain of the wood in order to recognize it as wood. One of the most effective measures for preventing extensive carpenter bee damage is to fill old or empty holes with Energy Seal. Carpenter bees are attracted to existing holes. Be sure to treat the hole before you fill it since live adult bees will drill right through the caulk on their way out.

One way to keep carpenter bees from drilling into wood is by spraying pesticides that contain either cypermethrin, deltamethrin, or bifenthrin (Ortho Home Defense Max) onto wood surfaces. When it comes to carpenter bees, these products act more as repellants than contact poisons. However, the effectiveness of these applications is only about three to four weeks, so the treatment will have to be repeated every so often. Pesticides should only be used during the periods of peak activity in the spring and perhaps again in late fall. Be sure to follow label directions and read and understand any precautions that must be taken when using these products.